The staff that ran the symposium was TOP shelf!  All of the rotations went smoothly, and were well attended.  The presenters were top notch, such as Binh Pho, Andi Wolfe, Dick Sing, Lyle Jamison, Nick Cook, Carole Floate, Trent Bosch, Rob Wallace, Jason Swanson and Steve Sinner.
The “Pen Turning for the Troops” Friday evening was very well attended, and over 40 pens were made in just a little over an hour with Jason Swanson and Don McCloskey pitching in and assisting people who had never made a pen.  Dick Sing was asked if he was in line to make pen, which I thought was pretty funny since he is the “Godfather of the pen world.”  He graciously said “No, but I can help you!”
The only minor set back was the 16” lathe that they wanted me to use was too big.  The banjo with the larger tool rest would not get close enough to the pen blank so I used a Turncrafter 10” Mini lathe from PSI. My rotations on how to create a pen from beginning to end, clear casting and segmented pen making went very well, and the attendees liked what I had to present. I demonstrated a CA glue finish and then compared it to a friction finish using Odie’s Oil so the attendees could see for themselves the look and feel of both finishes.  They liked the Odie’s Oil finish as a fast and easy way to apply a friction finish that will last a long time, compared to current friction finishes. The image with my hands to my mouth were tongue and cheek telling the audience contrary to popular belief that you do not need a pressure pot to clear cast with polyester resin – they liked the results!  The segmented turning rotation was really fun since I show them Jason Swanson’s segmented pen blanks he made!  Look for Jason’s blanks next week on the www.arizonasilhouette.com website.
All in all it was a very good symposium, and I would recommend anyone in the Great Lakes, Midwest region to attend this symposium in the future! 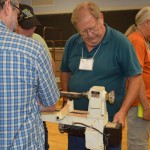 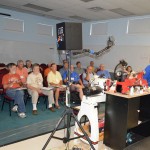 Attendees waiting for Barry to start his rotation. 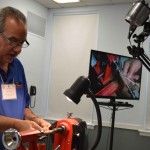 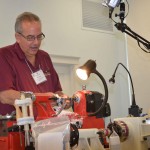 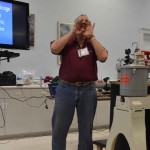 Barry shouts out “You do not need a pressure pot to clearcast!”

14 thoughts on “The Chicago Symposium was Great!”

This site uses Akismet to reduce spam. Learn how your comment data is processed.

Sign up to be notified of new blog posts.